KTM 1290 Super Adventure 2015 allroad touring motorcycle offers one of the highest V2 -performance, most advanced safety features, a long fuel range and finally a cruise control. The difference on paper to the category leader BMW R1200GS Adventure 2014 has never been smaller and basically the difference is only with the drive train and the front suspension. The 1290 comes with the chain drive which is the lightest solution and delivers the power to the ground with the smallest resistance. This may be for the factory a kind of signature, but big allroad touring motorcycles would benefit from the maintenance free drive shaft. Nevertheless, good quality chains are today really good and require less maintenance from the rider than earlier and the 1290 comes with the center stand which basically clears the issue. The KTM 1290 Super Adventure 2015 is a very competitive allroad touring motorcycle in every way. 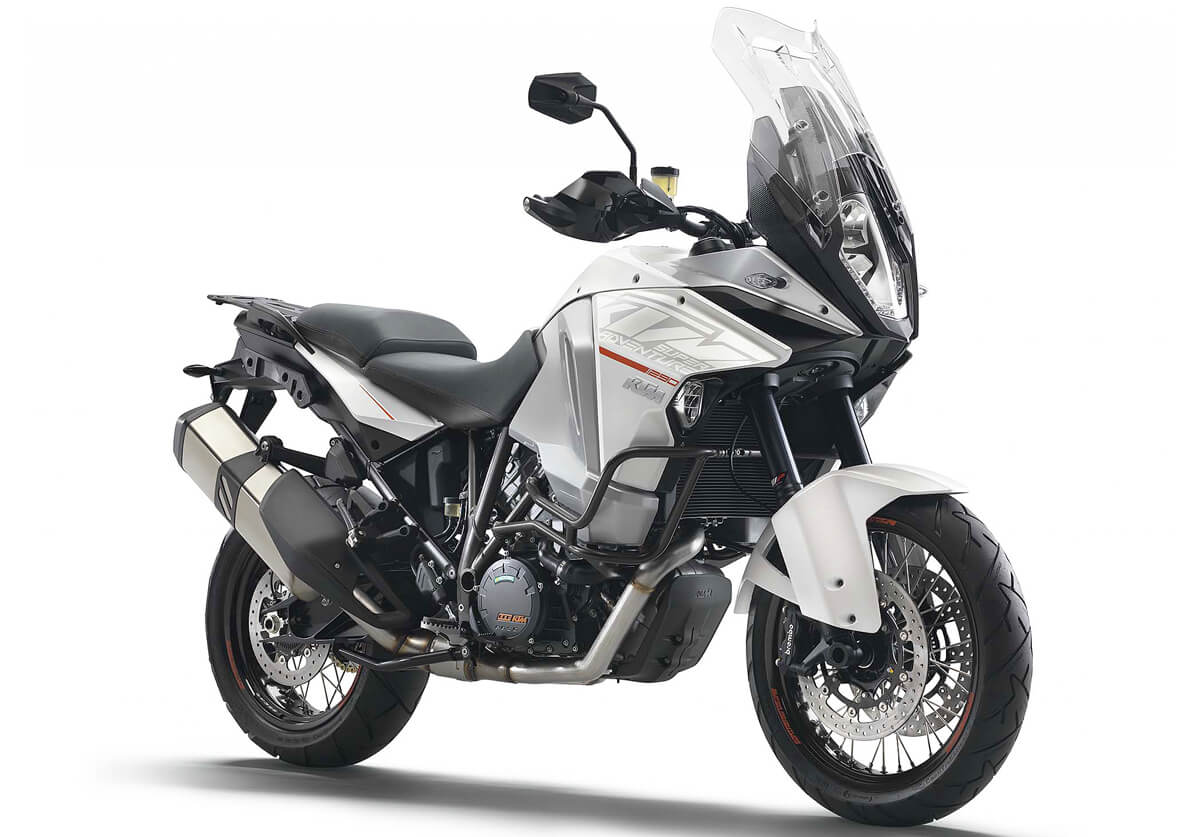 The KTM 1290 Super Adventure 2015 has made a clear step forward with the touring features. Comfort comes as one of the leading principles. The two piece seat is probably the best touring seat ever made by the KTM. The wind cover and the fuel tank are the biggest seen from the factory. The fuel range goes well beyond 500kms or 311 miles without reserve canister, but unfortunately the STD fuel settings start from 95RON up even though the low octane fuel is still the only choice in some of the most remote areas. This is a little bit odd detail, but no surprise. The 1290 has 19 inch front- and 17 inch rear wheels which is typical for big allroad touring motorcycles. The cross spoked rims allow to take the 1290 on gravel surfaces and enjoy offroad routing. Nevertheless, this size of motorcycle is hardly very agile on challenging surfaces and tracks which would require some weight loss, a 21 inch front wheel and preferably more ground clearance. The KTM 1290 Super Adventure 2015 is not designed to compete with the little brother KTM 1190 Adventure R 2014, but for sure I would choose the 1290 instead of the basic KTM 1190 Adventure 2014. 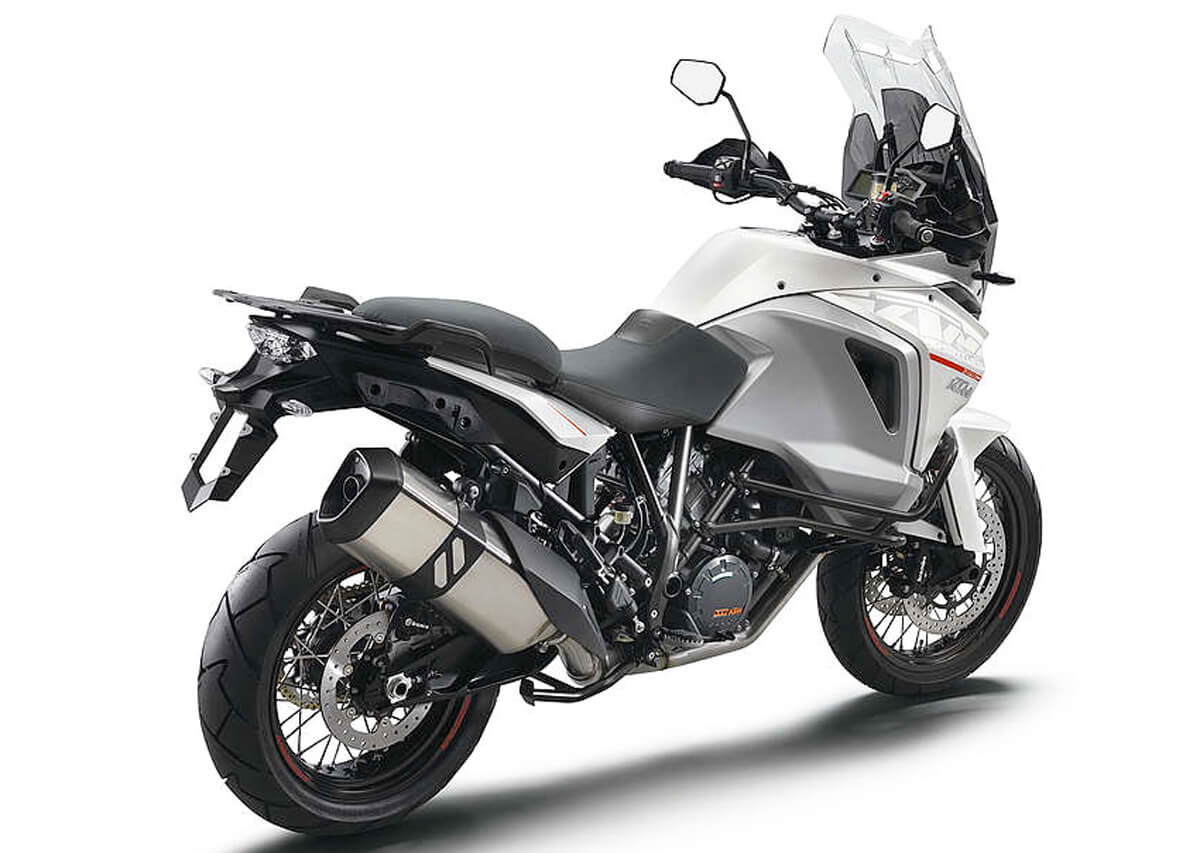 The KTM 1290 Super Adventure 2015 could be described as high performance oriented allroad touring motorcycle. This is a combination of serious offroad handling capabilities and an intelligent power unit with advanced safety features and electronics. The Super Adventure wind cover and the ergonomics are one of the best in the category. The Super Adventure offers one of the most competitive package with a lot of STD accessories. There are extensive riding aid systems including a cruise control, LED lighting system, heated grips and -seats for two, hand guards, crash bars, a center stand, luggage rack and a rear case carrier. 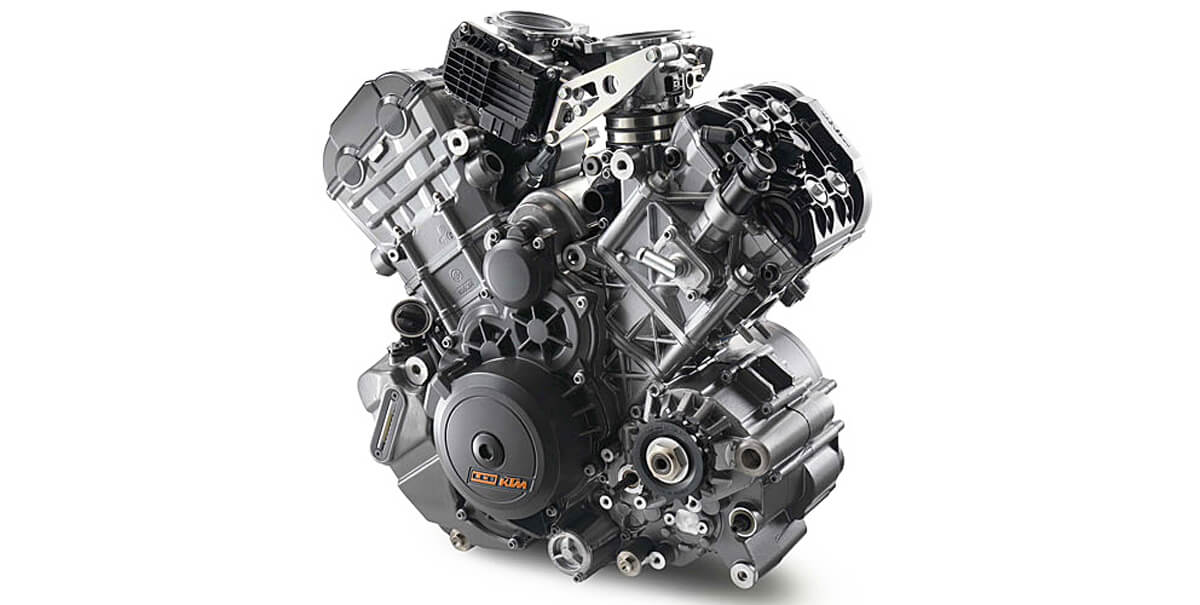 The KTM 1290 Super Adventure 2015 V2 engine delivers a staggering performance which is well beyond the adequate, although the low torque is very useful and offers 108Nm. already at 2500RPM. Therefore the 1290 comes with a very comprehensive stability control system and throttle management. The Super Adventure has 4 riding and throttle management modes working together with the traction control. Riding modes control the engine performance characteristics by changing the responsiveness and the amount of power available. The SPORT mode offers the highest output and the fastest reaction. The STREET mode is optimized for touring, providing smooth throttle control. The RAIN mode is the smoothest and limits the maximum power to 100HP. The OFFROAD mode is a combination of rain and street modes, allowing immediate throttle response up to the 100HP. The 1290 is ride by wire throttled and the very first time KTM comes with a cruise control as STD feature. The cruise control SET and RESUME switch is at the right hand side and works in a traditional way including the +/- adjustment. The factory has improved the throttle management making it smoother which helps to control the bike in offroad conditions, maintain a constant speed and set the cruise control accurately with the same hand.

A semi-active KTM 1290 Super Adventure 2015 WP suspension system -SCU brings additional comfort and control to different payload, riding style and surface conditions. The SCU reads the information from the fork, shock absorbers, 2 accelerometers and reacts accordingly by controlling the hydraulic circulation. On top of that the SCU info is utilized in the MSC and the ABS. The WP suspension offers 4 damping modes; comfort, street, sport and offroad. The COMFORT suspension mode delivers the softest ride, but as soon as the bump is detected, the SCU optimizes the available suspension travel the best possible way. The STREET mode is naturally less softer, but not as hard as the SPORT mode which brings the 1290 to it`s limits. The OFFROAD mode utilizes a 200 mm. suspension travel to the fullest and since the 220 mm. ground clearance is not a lot for such a big touring motorcycle, the SCU assistance comes very handy. The semi-active WP suspension also monitors the weight and supports different kind of payloads automatically. The Super Adventure comes as STD with a WP steering damper which is beneficial in offroad conditions by eliminating hits from the ground to the handlebar. Potholes, stones, uneven bridge structures etc. can annoyingly jerk the handlebar and therefore steering dampers are very useful. 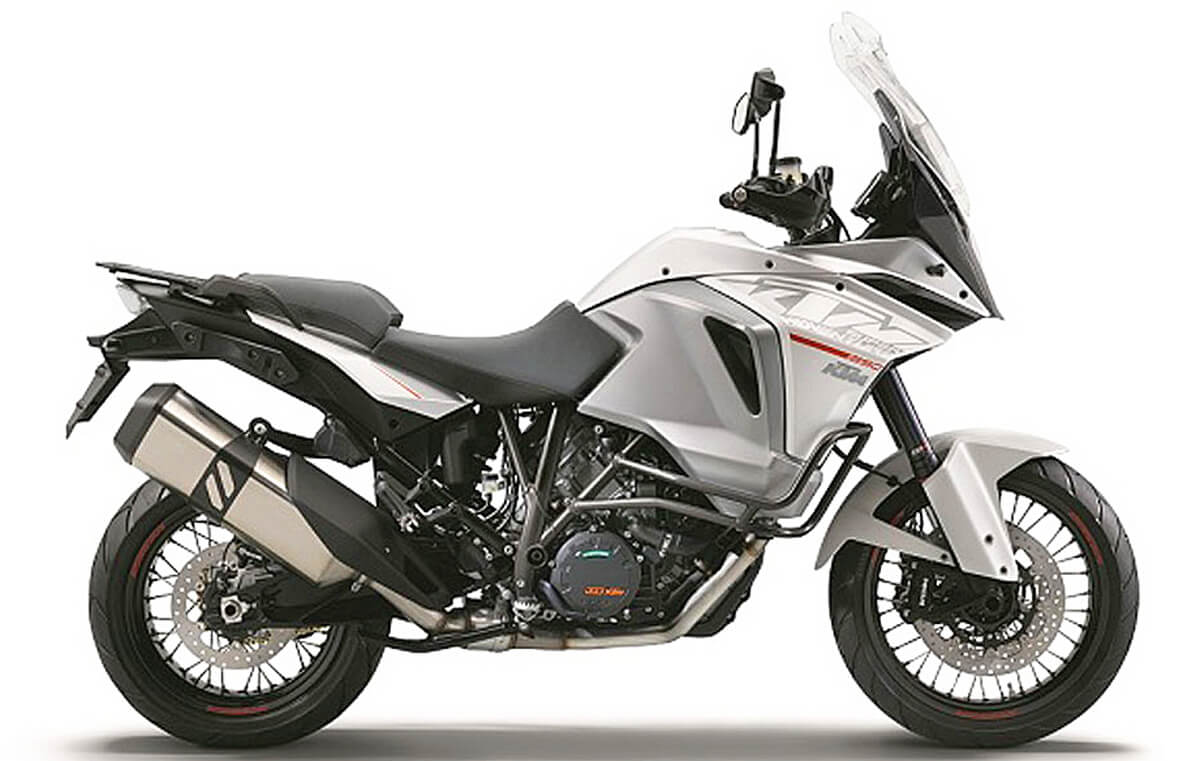 The KTM 1290 Super Adventure 2015 ergonomics are very good. The handlebar can be clamped in two positions (+/-10mm.). The rider seat has two positions with +/-15 mm. difference and a new padding supports the weight better than before without being hard. Both the comfort seats are heated like the grips which brings even more comfort to colder conditions. The foot pegs have also two positions (+/-10mm.) and the adjustable hand levers adapt to different size of hands. The 1290 windshield is tall, leaves room for air flow below and the top end is formed aggressively to flip the air stream above the helmet just like a spoiler. In fact the shape of the integral spoiler is bold and opens up widely in the middle in order to reduce the turbulence. The KTM 1290 Super Adventure 2015 windscreen has also manual adjustment nobs on both side and they can be operated with a single hand. The windshield has an assisting screen behind it which makes the wind cover even wider and reduces the drag in front of the rider. The big fuel tank has made the waist line wider, providing better wind cover for the upper legs and useful room for a pair of auxiliary LED lights. The hand guards come as STD. 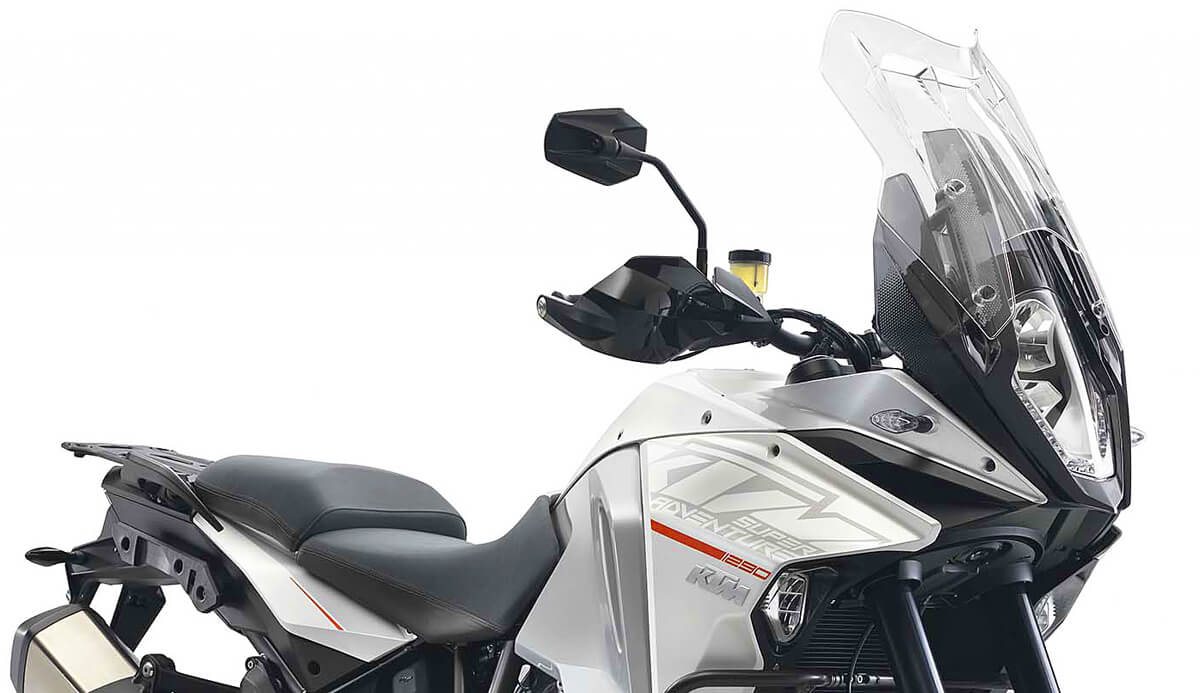 The KTM 1290 Super Adventure 2015 offers one of the finest safety and stability features in the category. The new generation BOSCH stability control system -MSC includes offroad ABS, traction control -MTC and 4 riding modes. The combined ABS has 3 modes, road, offroad and an OFF mode. Naturally the ROAD mode eliminates the wheel locking, but the stability control system is also progressive. The MSC takes the lean angle into account and optimizes the braking performance between the front and the rear. The OFFROAD mode allows to lock the rear wheel and slide the bike while the front wheel is still controlled by the ABS. The brake circuits are no longer combined and the foot lever works only with the rear wheel. The OFF mode gives a total control back to the rider.

The KTM 1290 Super Adventure 2015 traction control system has 5 modes including an OFF setup. The SPORT mode allows significant sliding and drifting. The STREET mode delivers smooth, but full throttle performance. The RAIN mode steps in as early as possible allowing minimal slipping and the power reserve is reduced to 100HP. The OFFROAD mode allows significant sliding and drifting, but the power is reduced to 100HP. The OFF mode disengages the whole MTC system from the equation allowing a full rider control all the time.

The KTM 1290 Super Adventure 2015 comes with a tyre pressure monitoring system -TPMS which helps the rider to identify tyre damages. The TPMS is useful also from the stability control system and ABS point of view since the MSC is comparing the front and the rear wheel spin differences. Low tyre pressure would increase the spin difference and could cause an ABS failure which basically prevents using the anti-locking feature.

Optionally the KTM 1290 Super Adventure 2015 can be equipped with an engine braking management software -MSR which would be interesting for those who prefer to use efficient V2 engine braking features when down shifting. The 1290 has a slipper clutch, but the big bore V2 back torque is very strong and able to slip the rear wheel. The MSR works together with the stability control system -MSC and takes also lean angles into account. Basically the engine braking system monitors and opens up the throttle just enough to prevent the rear wheel locking during the down shifts.

The KTM 1290 Super Adventure 2015 may very well be the safest dual sport on the market, but the other side of the coin is that the extensive riding aid system requires frequent rider input when conditions change. Even though the control switch is very intuitive and anyone can change the settings without the manual, I would prefer having the very finest throttle control without the TC. The amount of throttle and propulsion should never come as a surprise. The response should be very linear and practically divided for the whole length of the throttle twist. As long as the movement is not too sensitive or short, the rider will learn to control it without any TC support. High power engines such as the big bore LC8 would benefit from few basic throttle maps coming from the maximum down to the hundred. The rider could change the map anytime with a very simple switch on the handlebar. I hope that the ride by wire throttle management becomes more useful and allows a full rider control in stead of the traction control.

The KTM 1290 Super Adventure 2015 cockpit instrumentation is up to date in every way and clearly most comprehensive providing the best support for touring navigation and fuel monitoring. There are 2 LCD displays, warning symbol lights and a traditional tachometer in the middle. This is a perfect instrument cluster, although I would prefer having additionally a navigator stand right above the instruments. The settings are controlled with the left hand using 5 buttons and a very simple logic. At the left there is also a 12V power outlet for travel electronics and a small compartment on the right. The left hand LCD display provides detailed onboard computer information which can be grouped individually and set as favorites: 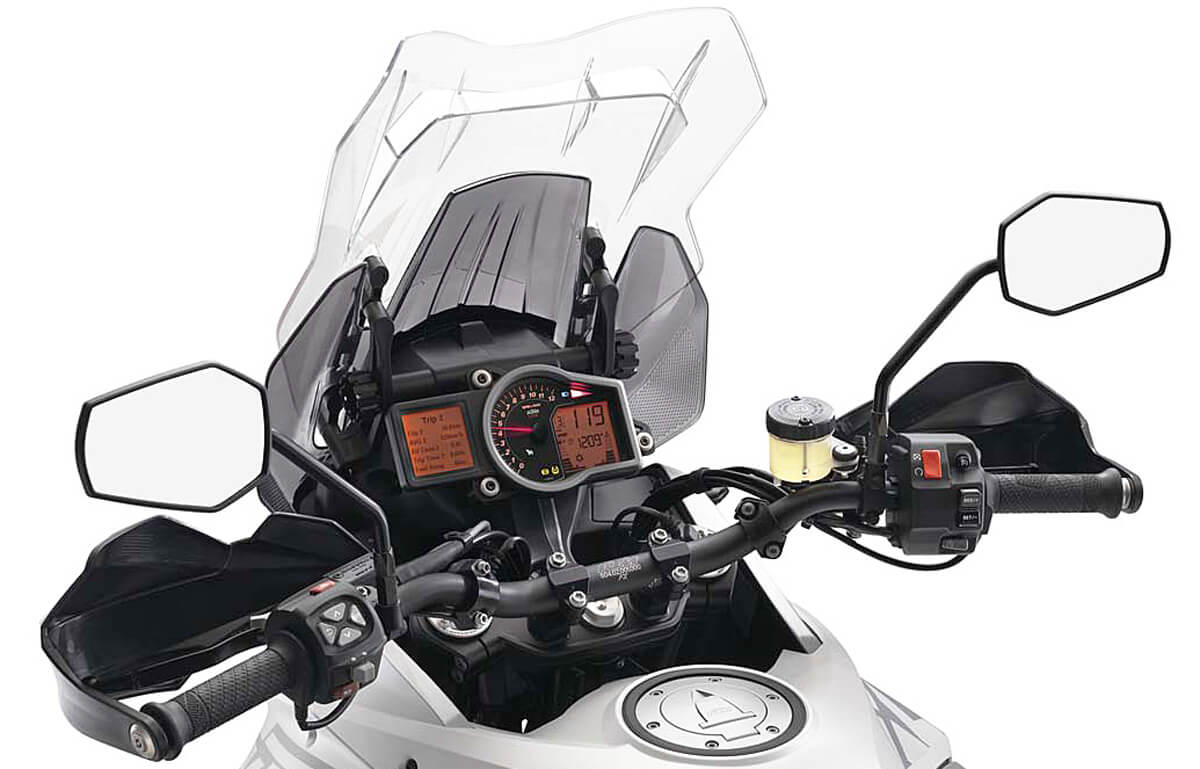