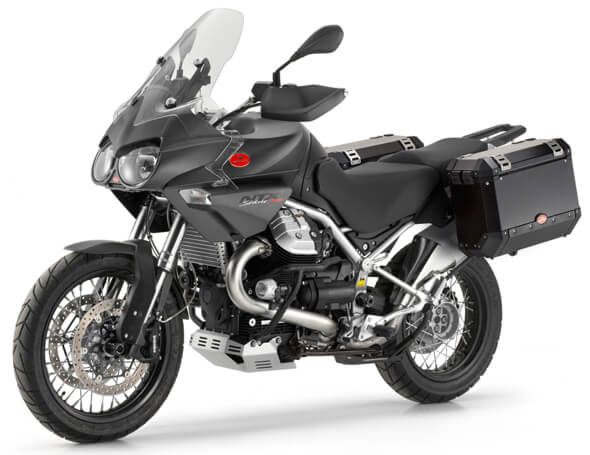 The MotoGuzzi STELVIO 1200 NTX 2013 provides very good rider ergonomics and a good overall package for comfortable allroad touring with a passenger. STELVIO has a clear allroad touring enduro character due to the cross spoked rims, better windshield with wind deflectors, engine skid plate and crash guards as standard, but also a big long range fuel tank. As an exception the STELVIO has lower seat height and riders at least 170cm tall should be able to master the weight. Without a doubt the STELVIO 1200 NTX 2013 can be used for reasonably adventurous routing, but the NTX is not ideal for really challenging roads and trails due to the overall weight. By choosing proper allroad tyres with wider and deeper grooves the STELVIO -rider can easily open the gravel and dirt road options for more adventurous routing.

A standard MotoGuzzi STELVIO 1200 NTX 2013 is very close to the level of ready to go for an allroad adventure. Some small tuning may be in order such as side stand foot extension, front mud guard extension and perhaps also heated grips. Fortunately the fuel tank is big enough giving true long range capabilities, but there are no low octane fuel settings which limits the remote exploring. The long range fuel tank is an quite exceptional feature and gives the advantage to use the whole payload capacity at the back without fuel canisters. Therefore MotoGuzzi STELVIO 1200 NTX 2013 is certainly capable for light allroad touring and good for riders that are not looking for the highest performance nor hard core offroad agility. In stead they look for a comfortable allroad touring bike which takes easily two people on a long tour and suits also for every day biking. 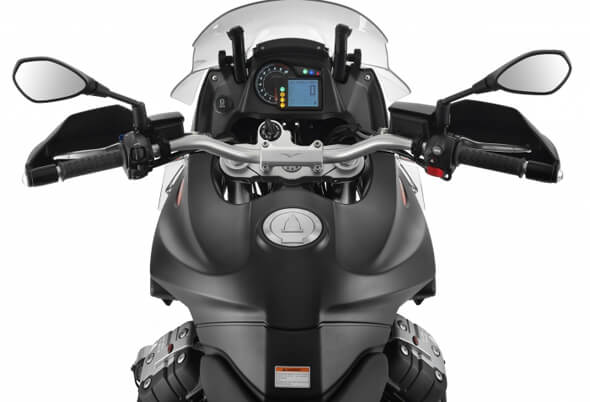 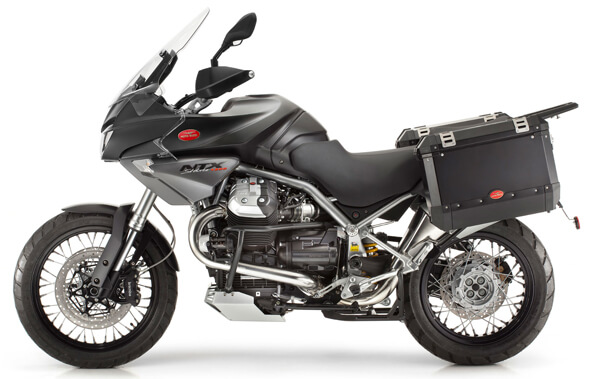 There are plenty of universal equipment that can be used with the MotoGuzzi STELVIO 1200 NTX 2013, but perhaps due to the limited numbers of STELVIOs on the road, there are not many model specific options available and most of them are provided by the MotoGuzzi dealers. One of the few equipment providers that pay attention to STELVIO riders are the SW Motech and Twisted Throttle US.